ANDY HENDRICKSON – Andy is a clever, conversational style that has been engaging audiences for over 15 years. His material is based on real life experiences and his anecdotes are laced with a hearty disapproval. He doesn’t really know what that means either.

ANDY PITZ – Andy has been performing his unique and always fresh and funny brand of standup comedy across the US and worldwide for 20 years. He’s sure to provide fun, wholesome entertainment for any event. Dependable, professional and very, very funny!

BOB GOLUB – Bob’s vast array of experience in the entertainment world has lead him on “The Tonight Show” to a role in Martin Scorsese’s 1990 blockbuster film “Goodfellas”.

CHRIS COCCIA – Chris appears in top clubs like the Improv and Catch a Rising Star, Chris has entertained American troops in Korea, Japan, and Guam. 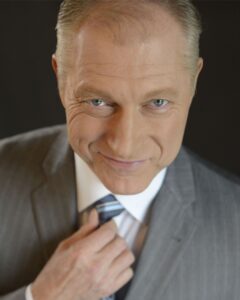 DAVID KAYE – Clean corporate and comedy club comedy headliner, his tongue-in cheek delivery and razor sharp wit stays within the bounds of good taste.  A Fortune 500 favorite, his material is tailored to suit every situation.

JOHN DiCROSTA – Dozens of voices, off beat impressions, topical humor, sight gags, a few props, and sometimes even ventriloquism are among the tricks this comedian has up his sleeve.

JOHN KNIGHT – John has been described as an every man’s storyteller with a deadpan cutting edge. His numerous television appearances include Comedy Central and Showtime.

KAREN RONTOWSKI – When it comes to her stand-up comedy career, everything is coming up roses, or at least laughter. She describes herself as completely confident in her confusion.

KATE BRINDLE – Described as “smart,” “original,” and “hilarious.” Kate has performed her sarcastic yet upbeat and spunky style of comedy on the Canadian Broadcast Channel, Cox Cable, and Comcast Cable.

LARRY REEB – Known as Uncle Lar’, Reeb is the wise-cracking black sheep, politically incorrect relative everyone knows. Uncle Lar’ offers tips on everything from marriage to lotteries to children.

LIZ RUSSO – Her self-produced and hosted comedy showcase, One Night Stand with Liz Russo, was a running hit at Caroline’s on Broadway in New York City.

MARK RICCADONNA – Mark is a gifted storyteller, with a charisma and a unique delivery, signature voice (that has landed him several commercials) and likability.

MIKE EAGAN – Watch Mike once and you will think he is making up everything that comes out of his mouth right on the spot. Watch him a number of times and you will realize that happens a lot

MIKE JONES – Mike has enjoyed Int’l success with European and Asian tours since 1995. Performances with Jamie Foxx, Patti Labelle, Bernie Mac, The Whispers, Cedric The Entertainer, and many more.

MIKE STANKIEWICZ – This clever comic will turn the tables on everyone. Stank takes you down a road you didn’t expect to travel with a conversational style that makes you feel like you’re riding the bar stool next to him.

MIKE WYSOCKI – Mike is currently a cast member and contributing writer to the “Jim Krenn. No Restrictions” podcast heard on the Sideshow Network, and can be heard on the Q-92 FM Morning Show.

MISS GAYLE – “Miss Gayle” is a remarkably funny lady! Currently she is performing all over the United States and abroad overwhelming audiences with her humor, charm and wit.

RACHEL MCDOWELL – During her show, Rachel shares her unique and adorable perspectives on culture, relationships, and laughing in a way that both sexes and all ages enjoy.

ROCKY LaPORTE – Rocky’s appeal comes from his streetwise style of comedy. Rocky recently appeared on on the season 8 of NBC’s Last Comic Standing!

SEAN COLLIER – Sean Collier was described as a “budding media personality” by the Pittsburgh City Paper, and no one – least all of him – seems to know what that means.

SHAUN BLACKHAM – “Energetic, observational comedy that pushes the limits on just about every subject. Shaun has a unique style and vigorous outlook on life and the world.

STEWART HUFF – Huff reaches past the norm for his genuine and genuinely unexpected comedy. His knack for embracing the foibles of humanity and his refreshing originality make him as likeable as he is hilarious.

TENNESSEE TRAMP – Janet doesn’t hold anything back about her views on marriage, divorce, men, and women. She takes her comedy to the edge and over the top. She’s not just the Tennessee Tramp; she’s a favorite of the Troops.

TIM HOMAYOON- Tim caters his act so that his material appeals to everybody: storytelling, wild advice, physical comedy, and clever original ideas.

TIM KIDD – Easily described as a monkey with ADHD, who needs his Ritalin, a nonconformist through most of his youth. Tim’s childlike exuberance and high octane fueled stage presence delivers a fast paced record of his life from an exceptionally funny point of view.

TINA GIORGI – Tina Giorgi is a crowd-pleasing intelligent comedienne. She is a favorite act in major clubs across the country and a constant performer in New York City and Las Vegas.

TOM ANZALONE – is a talented “International Musical Comedian”, who turns his ability of singing and guitar playing into a hilariously musical-comedy revue.

TONY DEYO – Tony Deyo is a comedian known most notably for his sharp, quick material and near-perfect comedic timing almost certainly gained from his years as a professional symphony musician.

TRACIE JAYNE – A mechanic? Yes, it’s true. Sure she’s a little blonde. Sure she’s a girly-girl, but she drinks, she smokes, and she tells it like it is…it ain’t pretty.